At first glance, the Electrofrog is a nicely designed turnout.  Except for the guard rails, there is no plastic for wheels to run on.  It's completely Code 100 (or 83 or 70) nickel silver rail.  It's a beautiful turnout.  When weathered, ballasted, and scenicked, you don't even notice the oversize ties, tie plates or track spikes.  The positive locking action of the switch points makes it the ideal turnout for anyone's layout.

When it comes to using DCC, there are a couple of problems.  The solutions, however, are relatively simple. Let's first take a look at how the power is routed in the Electrofrog so as to get a better understanding of the operation of the turnout.

Power-Routing In An Unmodified Peco Electrofrog
The Electrofrog was originally designed for the days of analog when we wanted to power sidings based on which way the points were thrown.  We could drive a locomotive into the siding and then set the points for the mainline route.  We could rest assured that the locomotive wouldn't creep away on us - assuming there were no track feeds in the siding.  We could then flick another turnout that held another locomotive and we could then drive that new locomotive.  This ability had everything to do with how the Electrofrog was wired - By a combination of the rails and wire bonds on the underside, the points acted as a switch that routed the power to either the mainline route or the diverging route. 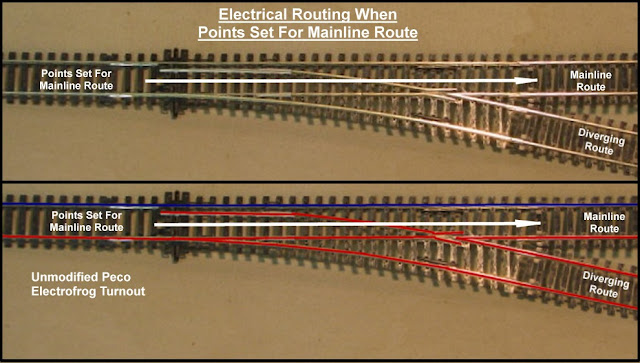 If we now throw the points for the diverging route and trace the electrical polarity, we see that a similar situation exists. Notice how the polarity of the points and the inside mainline and inside diverging rails have changed from red to blue! 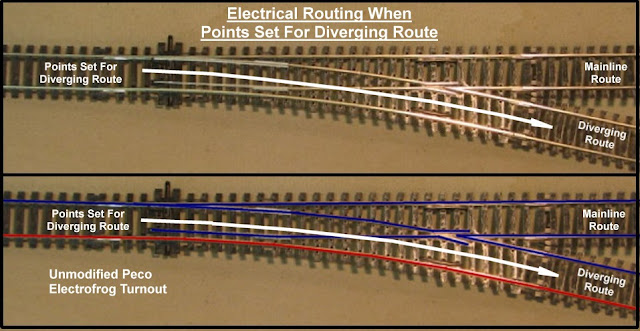 The advent of DCC, however, got rid of the concept of power-routing.  Locomotives only moved when we told them to move (via the throttle).  When we parked them, they stayed parked, even though there was still  power in all the rails.  We also added all kinds of track feeds beause we didn't have to worry about power-routing any sidings, particularly around turnouts.

Good DCC wiring practice requires us to have track feeds before the points and track feeds after the frog on both the mainline and diverging routes.  Which caused problems with the Peco Electrofrogs.  Because the points power-routed the power, and depending on how things were wired, the Electrofrogs shorted things out.  Let's take a look at an unmodified Electrofrog and see how this happens.

DCC And Shorting In the Electrofrog
In the photo below, we've added our track power buss and the track feeds before the points and after the frog and set the points for the mainline route.  You can see that doing this creates a major short at the frog where the red current on the inside mainline rail crashes into the blue current of the inside diverging rail - electrically speaking, that is.

And if we look at the electrical routing when we set the points for the diverging route, we have the same thing happening - a major electrical short!

How can we get rid of the electrical short in the Electrofrog.  Let's take a look at the first of a 4-step process.  The mods are simple.

Step 1 - Insulated Rail Joiners After The Frog - Mandatory!!
In addition to adding track feeds before the points and another set after the frog on both the mainline and diverging routes, our first step is to add insulated rail joiners on the inside mainline rail and the inside diverging rail. (If your turnouts are already installed, simply cut gaps in the rails after the frog and fill the gaps with epoxy.)

When we set the points for the mainline route, the points of the Electrofrog continue to power-route the power as before.  However, because we've added an insulated rail joiner on the inside diverging rail, we no longer have a short, notwithstanding that both point rails, the straight closure rail and curved closure rail have the same red polarity.

As a minimum, if you are using the Peco Electrofrog, you HAVE to install the insulated rail joiners on the inside mainline rail and the inside diverging rail.  Or gap these rails and fill the gaps with epoxy or styrene.  NO EXCEPTIONS! 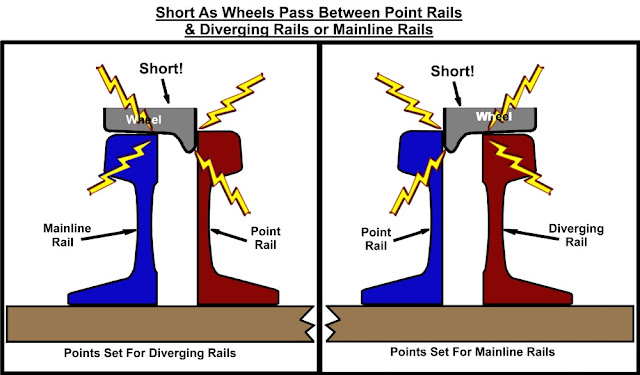 To fix this problem, we have to go to Step 2 where we slightly modify the wiring of the Electrofrog.

Dear Sir. Following some good/well meaning advice, unless I have misinterpreted what I read? I have just been wiring a new layout,
Following the lines of the old layout, but , there must be something wrong with the wiring.. as the Locos ,all of them, keep stalling on the livefrog points. I have done my best with cleaning the rails, but to no effect. Alec Trician

Hi, thank you for this nice article, however, the Step 2 link is unfortunately dead, is it possible to fix this ? thanks.