On our previous posts, we cut the Styrofoam.  Then we got the materials we're going to need together (this part can get messy so we want to make sure we're not scrambling for a spray bottle, cleaning rags, etc).
Now we're ready to apply the glue and install the Styrofoam.  Make sure you have a flat work surface, particularly if you aren't going to use the clamping method.

If any of the T-nuts are going to be covered by the Styrofoam, place a square of masking tape over the washer end of the T-nut as the polyurethane glue will expand into the T-nut.

Make sure you have the shop rag soaked in varsol close by.  I put my soaked shop rag in a shallow plastic container so that the rag stays soaked.  You will need your spray bottle of water close at hand, primed and ready.  Your garbage pail should almost be at your feet ready to discard the two 18" strips of masking tape.

Spreading The Glue
1) Place the Styrofoam on the two blocks on the floor so that you are looking at the 22 1/2" edge.

2) Squeeze a thick bead (or two thin beads) of polyurethane glue along the length of the 22 1/2" edge as shown in the photo below. 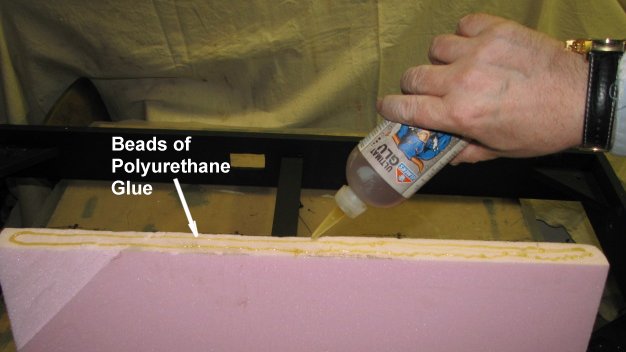 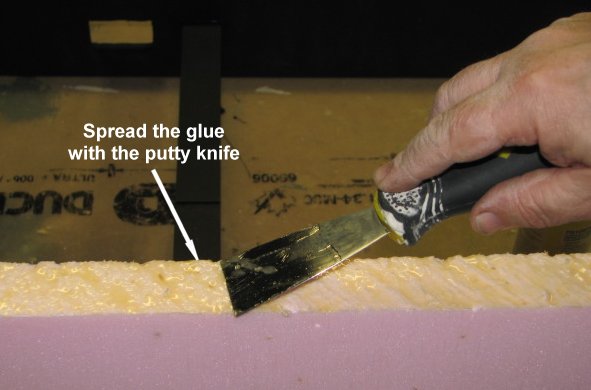 5)  Rotate the Styrofoam 90 degrees so that you are looking at the 46 1/2" edge.  Place the Styrofoam on the module frame so that it is resting on the two 18" strips of masking tape.  Apply and spread the glue.

6) Rotate the Styrofoam 180 degrees so that you are looking at the other 46 1/2" edge.  Rest the Styrofoam on the two strips of masking tape. Apply and spread the glue.

You should now have all 4 edges of the Styrofoam buttered with polyurethane glue.  You have a very sticky mess on your hands.  This is where having the varsol-soaked shop rag close by is very handy.

7) Pull the two strips of masking tape off of the module frame and discard them in the garbage pail.

"Spritzing The Module Frame;  Inserting The Styrofoam; Duct-Taping The Top
8) Liberally spray the interior of the module frame with water.  The water should almost be running down the inside of the frame.

9) Insert the Styrofoam into the module frame.

10)  On the top of the module, cover the gap between the module frame and the Styrofoam with duct tape.

11) If you aren't going to clamp the Styrofoam down with clamps and spruce strapping, go to Step 13.

Clamping The Top Deck
12) If you have the clamps and spruce strapping, clamp the Styrofoam down to the module frame on the 4 corners and then in the middle as shown below.  If you have extra clamps, you can add them if you wish.

Babysitting The Polyurethane Glue (Very Important!)
13) Turn the module over so that you are looking at the underside of  the module.  You will see that the polyurethane glue has already started to expand and is oozing out of the gap between the Styrofoam and the module frame.

14) If there is a large cavity that is less than 1/8", dribble a bit of polyurethane glue into the gap. 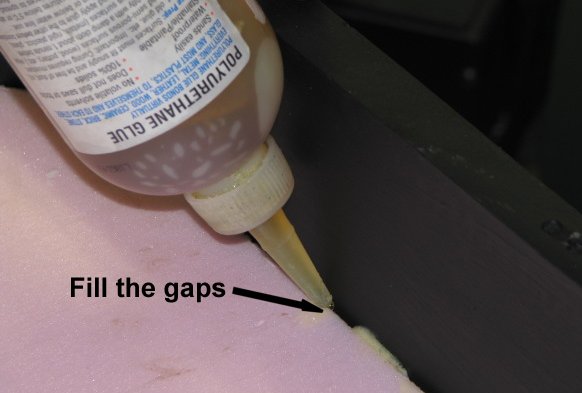 15) If the cavities are greater than 1/8", slice some pieces from a chunk of scrap Styrofoam.  Dribble some glue into the gap.  Insert the slice of Styrofoam.  If any part of the slice sticks above the surface, trim it flush with the underside with a utility knife.

16) Liberally spray the Styrofoam with water. 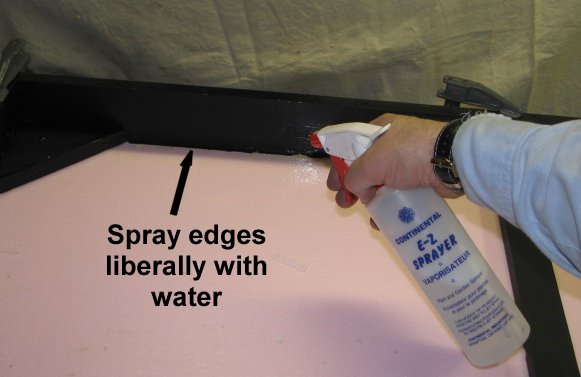 17)  By this time, the polyurethane glue is oozing nicely out of the gap between the Styrofoam and the module frame.  Notice the difference between the photo above and the one below taken 30 minutes later - lots of glue oozing out of the gap.   Scrape the glue off of the Styrofoam with the putty knife and stuff it into any cavity where the glue hasn't yet oozed out.  Repeat this process for the next hour. 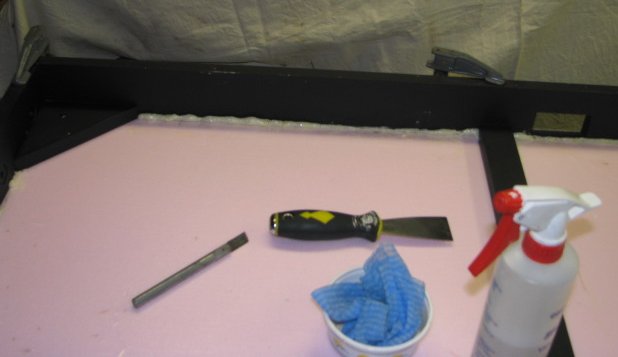 Here's a close-up of the foaming glue where we've masked off the underside of the module with masking tape. 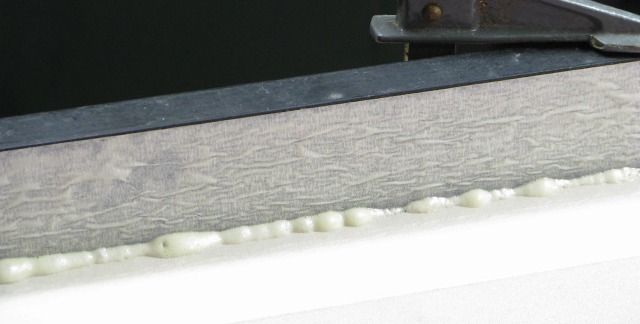 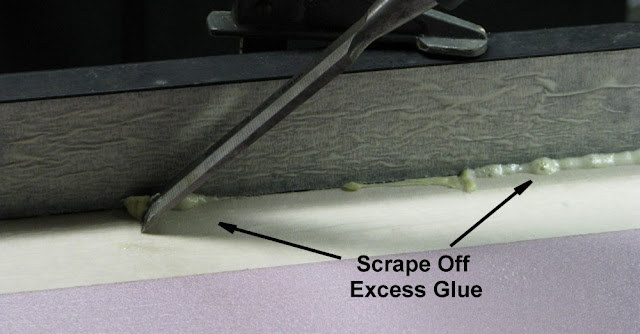 19) Periodically clean your hands, the glue bottle, and the spatula with the varsol-soaked shop rag.

Removing Masking Tape, Clamps & Duct Tape/ Preliminary Cleanup
21)  If you've taken the option of taping the interior underside of the module, peel back the duct tape, working the tape from the top and outside of the module frame and the Styrofoam back to the edge where the polyurethane glue has oozed out. Using the edge of the spatula or other semi-sharp tool, as you lift the edge of the maksing tape off the module, scrape the still-gooey bead that remains off the Styrofoam and module frame.

22)  After 2 hours the glue will have set up, is no longer oozing out of the gap but it's still soft.  Turn the module over so that you are looking at the top.  If you've used the clamps, remove them.

21) Remove and discard the duct tape.  The glue on the top of the module has been held in check by the duct tape but there may be a bump around the perimeter of the module where the polyurethane glue has tried to ooze out of the top - more pronounced if you didn't use the clamps.

22) Glue will have oozed out underneath the duct tape and onto the module frame.  As you remove the duct tape, you will find that most of the excess polyurethane on the Styrofoam has peeled off with the duct tape.  However, the glue on the module frame stays in place.  This glue may be slightly soft.  You may be able to scrape it off the wood with the putty knife or with a chisel. 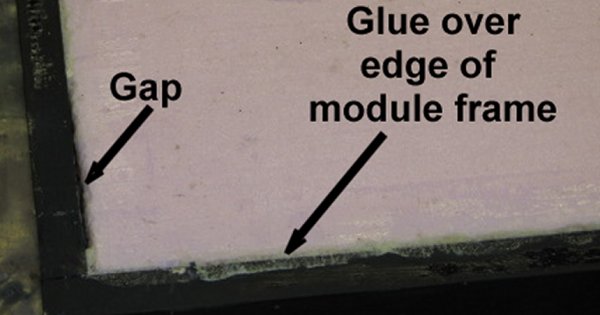 Voila!  We have just permanently glued the Styrofoam into the module frame. 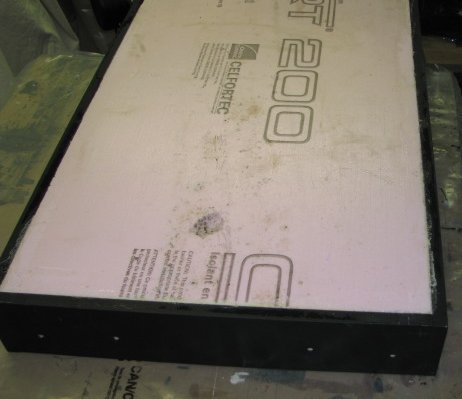 Next up.  We trim the polyurethane glue bead from the underside of the module and finish up with a masterpiece.
Posted by Railway Bob