Wow!!  At last!  We've got the module deck completed.  We started out with some

Before we lay any track on the module deck, there's two things we have to get out of the way first -
1) Install the track power buss;
2) Install the LocoNet and telco jacks/ UP3/5 panels.

This will save us a lot of time and headaches later on.  There's nothing worse than having the module flat on its back with the underside face up and the trackwork laying on the work surface.  We usually compromise by stringing the track power buss on the surface of the gussets and middle cross member which leaves the wiring vulnerable to tearing out, or on its side which results in a lot of sag, wire staples, and hanging track feeders.  If we can work on the wiring now, we can get it nice and snug to the surface of the Styfoam so that wiring the track feeds will be a piece of cake.

I find the best wire source is the automotive supply store that carries trailer hook-up wire.  It comes in 18, 16, 14, 12, 10,  8 AWG wire sizes, 25' and 100' rolls, and in 7 colours - white black, red, green yellow, blue, brown.  It's the same stuff that's used by the trucking industry to light up the trucks and trailers on our highways.  If it's good for them, it's gotta be good for my modules!  In North America, the major manufacturer is Grote Industries. Here in Canada, Princess Auto periodically puts the stuff on sale in 25' or 100'  rolls for about 15-25 cents a foot. 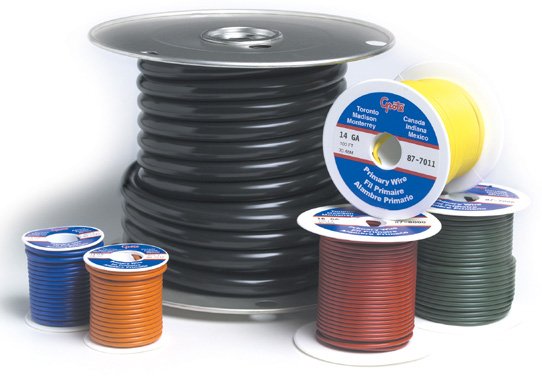 When soldering 14 AWG wire you need a soldering iron or soldering gun with a high wattage.  A 20-watt pencil soldering iron won't do the trick.  A 40-watt iron might do the job but it's going to take a lot of patience.  On the heavy-duty 14 and 16 AWG wire, I use a soldering gun.  The first click of the trigger gives me 100 watts.  The second click gives me 140 watts. 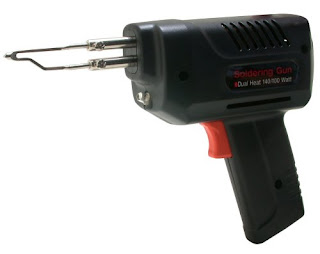 There are two kinds of solder - plumber's solder and electrical solder.  Plumber's solder is readily available at your local building supply store, along with acid flux.  It's the kind of stuff you use on the copper pipe in your house.  DON'T EVER USE THAT STUFF ON ELECTRICAL WIRE!  It will cause you great grief!  It's easy tell if plumber's solder has been used by the green corrosion on the wires and on the soldered rail joiners.  The corrosion starts to show up real quick.

Rarely will you find the name "electrical solder" on the label of the electrical solder.  You have to look for the word "rosin" on the label. Rosin is the flux used to complete the soldering operation on electrical wires and circuits. It comes in various mixtures and "thicknesses".  In any heating operation, oxygen in the air reacts and forms an oxide so that the solder forms a "blob" rather than flowing into and through the work.  To keep the oxygen off of the work, we need a flux - in this case rosin - to do the job properly.  While "rosin core" solders are advertised as having the flux in the solder, there isn't enough to do the job on our 14 and 16 AWG wire.  Which is why we need some extra rosin flux. Rosin fluxes come in two states - paste and liquid and several kinds of dispensers - bottle,  pen, jar, etc.  Each is equally as good as the other.

A soldering job isn't complete unless the solder "flows" along the two pieces being joined, whether it's rail joiner to rail, rail to track feed, track feed to pigtail, pigtail to track power buss, or track power buss to plug.  Using a combination of flux, solder, and the right amount of heat applied for an appropriate length of time, we can produce a connection that will last a lifetime.

My father used to say that we have to "cook" the solder.  That is, once the solder starts to heat up, leave the soldering iron on the wire for 4-5 seconds more (Count "one-thousand, two-thousand, three-thousand, four-thousand, five-thousand".)  This ensures the solder will flow into every strand of wire and around the joint.  (Don't try "cooking" the solder on a printed circuit board!)  Otherwise, we will end up with a "cold" joint that will give us problems months, even years, down the road.  The combination of flux, heat, and solder will ensure that we have a reliable electrical connection.

If you aren't familiar with the soldering process, practice on a few pieces of wire before tackling the track power buss. There are all kinds of instruction on the web which tell you how to solder. 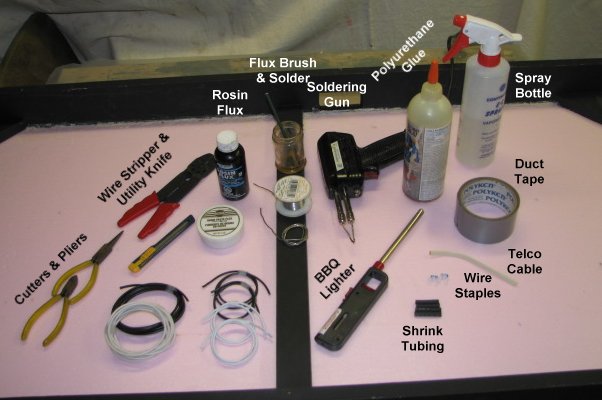 4) On each of the 6 wires, strip about 3/4" of insulation so that you are looking at bare stranded copper wire. 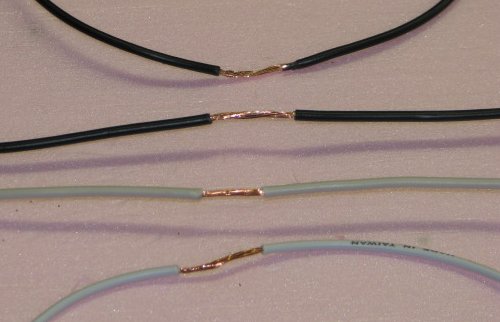 5) String the 14 AWG wire under the notch in the middle cross member.

6) Wrap a piece of 16 AWG wire around one of bare spots of their respective 14 AWG wire as shown in the photo below. 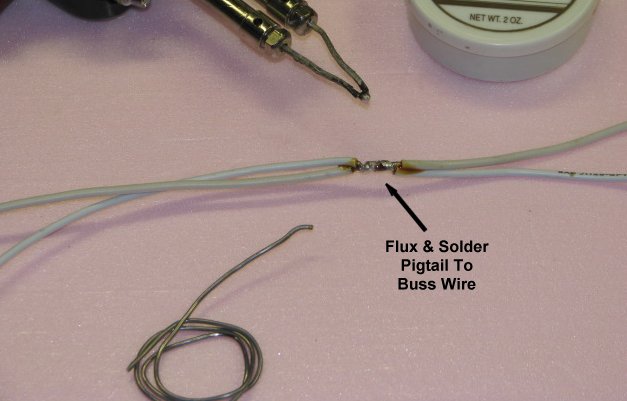 8) Roll on a piece of shrink-tubing so that it covers the bare soldered joint.  Shrink the tubing with the BBQ lighter or your favourite heat source.

10) Centre the pigtails on each half of the module (ie the 1' and 3' "mark").  Make sure you twist both the white wire and the black wire so that you have about 6-8 twists from one end of the module to the other.  (This is particularly important if you belong to a module railroad club where total module lengths are longer than 30'.  Twisting the wires together prevents "ringing" which can result in distortion of the DCC signal that goes down the track power buss.  For more information on the phenomenon, Google DCC Ringing.) 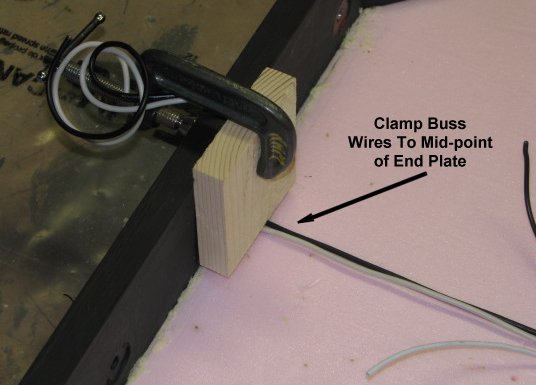 12) At the other end, pull the wires tight using the block of wood and the C-clamp as a lever.  When tight, clamp the buss wires in place. Again, the buss wires should be touching each other. 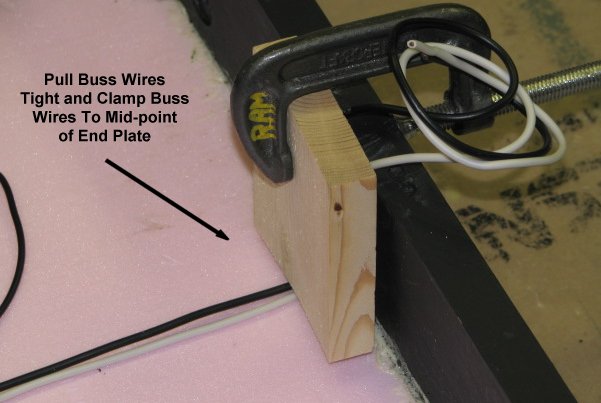 13) Insert the 6"-8" piece of telephone cable into the notch in the middle cross member and between the two buss wires.  The objective here is to ensure we have enough space to insert the 6-wire telephone calbe when we install our LocoNet cable.  You may have to use a "poker" (eg popsicle stick, ruler, etc) to cut a shallow channel under the Styrofoam so that the cable can slide through. 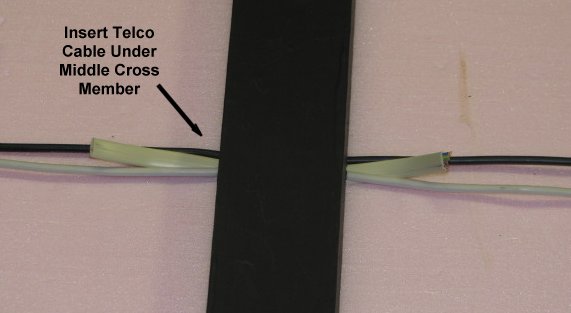 14) About every 6"-8" or so, place a small strip of duct tape across the two wires so that the buss wires are flat against the Styrofoam and touching each other.

15) Drizzle some polyurethane glue in between each strip of duct tape and over the two buss wires.  Spritzer the glue with water to start the reaction.  If necessary where the wires are lifting a bit off of the Styrofoam, put some weights (eg clamps, etc) across the wires. 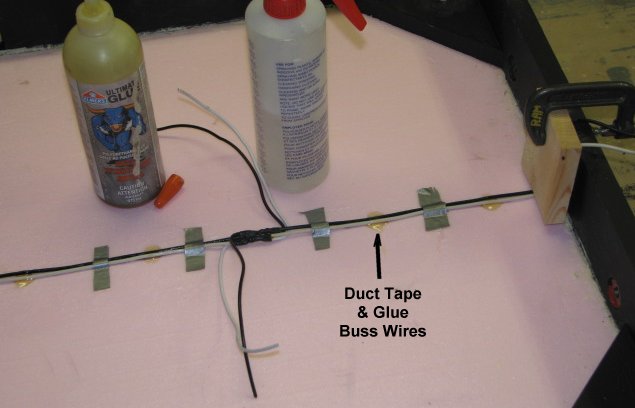 16) Once the glue has set and hardened, remove the duct tape.  You may have to apply more glue to the stuff already set to cover the wire.

Except for soldering our plugs (Jones, trailer, power pole, etc), we'll never have to touch the buss wire again.  It's nice and snug against the Styrofoam and we have a very neat package.  All of our connections with the track feeders will be done through the pigtails (which we'll cover in a later blog).  Simple, eh!?

Later on, we'll show you a trick for keeping the plugs and LocoNet connections out of the way when we transport our modules.

Next, we get ready to install the LocoNet.

(If you've stumbled across our blog mid-stream instead of from the start, you might want to start off with a previous post where we trimmed the size of the telco jack as it came right out of the box down to a slimmer trimmer package.)